Some final thoughts from Ed G on the Radlians time in Tanzania:
'The week in Gehandu changed a few assumptions I had made about African culture. To start with, visits to two of the student's homes was an experience which changed my outlook on my own life. Having seen hundreds of houses out of the window of the bus throughout the week, I assumed they were more comfortable on the inside even with their outer mud walls.
However, the houses were very dark and far too crowded and cramped. The lack of healthiness also struck me with there being fires lit and no chimney/exit for the smoke. The fact that the family were so happy and generous even though they are merely surviving will change the way I think when I feel annoyed or start complaining.
The teaching and everyday life in Gehandu Secondary was also an experience worth learning from. Beginning my first lesson thinking the student's shyness would not be a problem was an error. In the first few minutes a volunteer was impossible to find. However, the further into the lesson we got the confidence began to build and soon we had four leaders from four groups all standing at the front delivering loud, confident speeches. The work ethic of the students was inspiring too. We did not have an exercise where anyone finished early, they always had more to write.
My penpal Paul did not suffer from this shyness though. He is one of the keenest humans I have ever met and was also extremely generous and kind. I think having Paul was very useful as I could make a link which was challenging to make when just teaching. Paul was so welcoming and enjoyable to talk to and I can see why he is viewed as a legend throughout the school.
The debate on abolishing corporal punishment saw some very traditional attitudes from the Gehandu students supporting it even when it is still
In place in some situations. Of course, as it was a debate we were not sure if they were actually expressing their views however from the passion showed I think the cultural attitude is one supporting it even if it not as strongly as it was put across.
Overall the week in Gehandu included more than I have mentioned and every part added to the experience in different ways. The experience dramatically changed my idea of African culture and will help me think differently at many points in each day. It is an experience I would recommend to everyone and in some cases the British can definitely learn from the Africans.'
Posted by Inspire Worldwide at 15:28 No comments:

Team at the airport and on the way home!

Dear All
The team have now been safely dropped off at Kilimanjaro Airport ready for their flight back to the UK.
Some piccies of their last day in Tanzania are below!
Safe travels to all the Radley Team
Members- it's been great to work with you again!
All at Inspire Worldwide 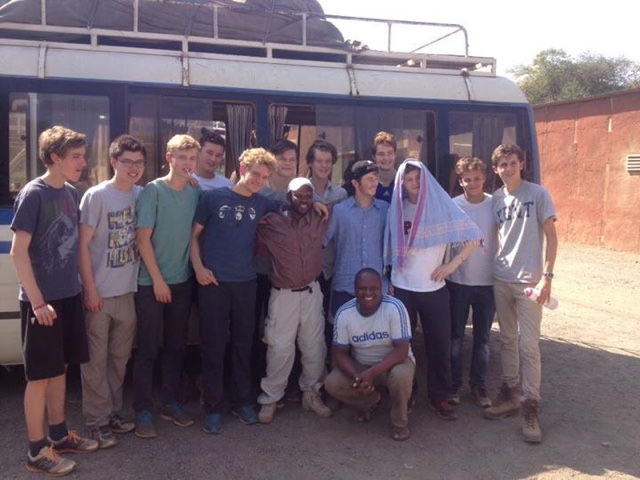 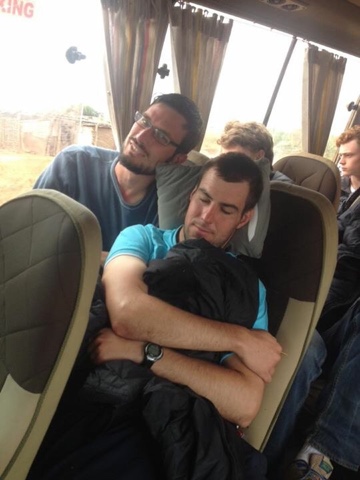 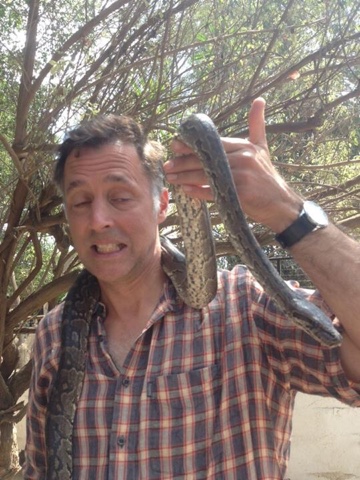 Posted by Inspire Worldwide at 16:02 2 comments: 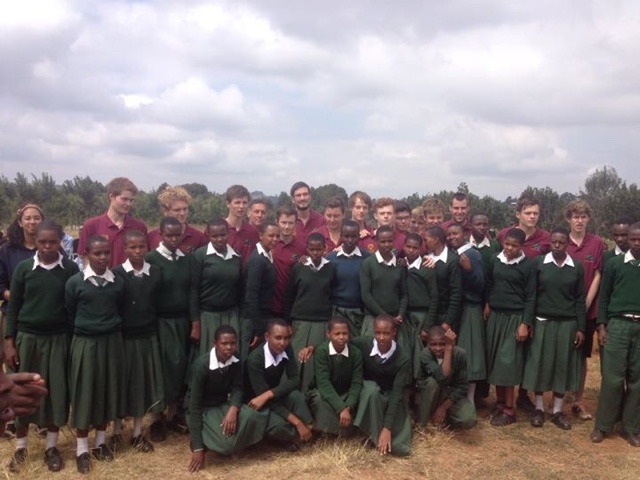 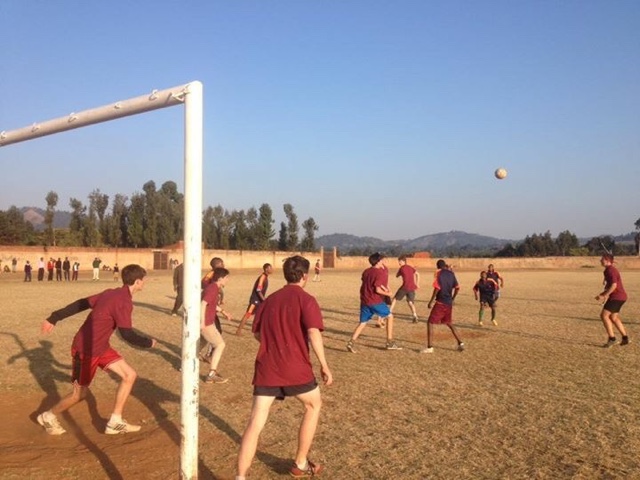 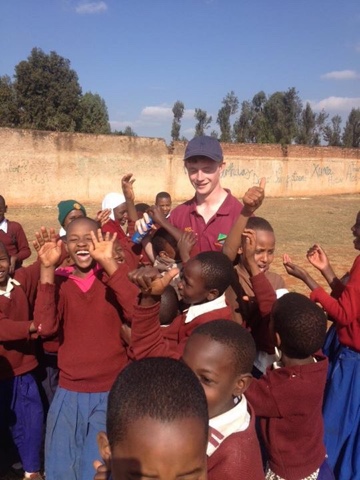 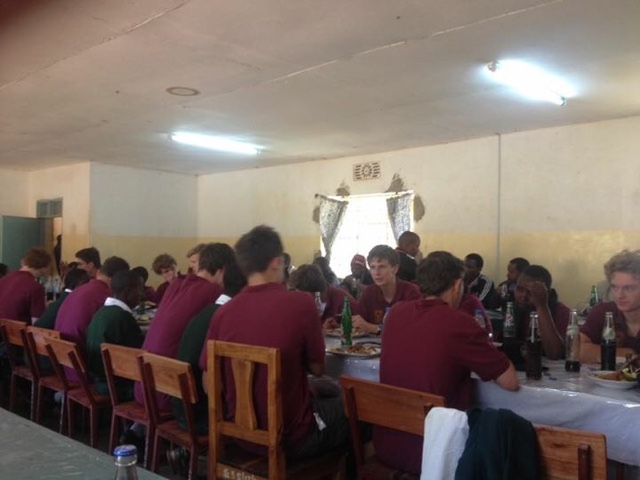 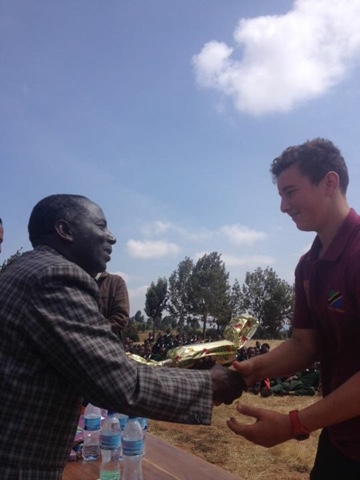 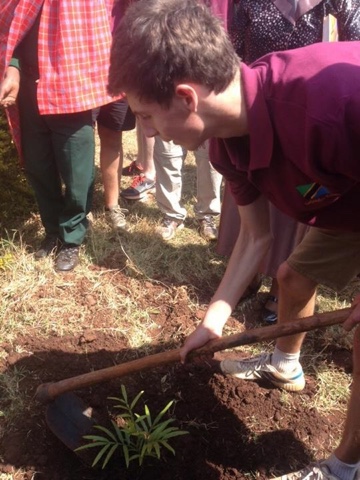 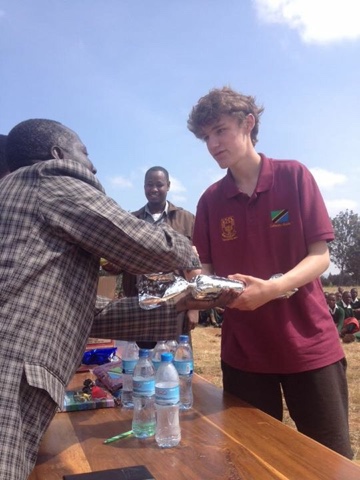 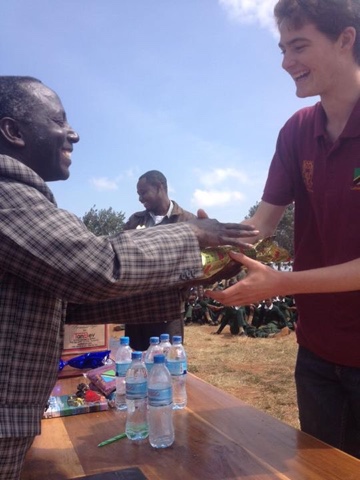 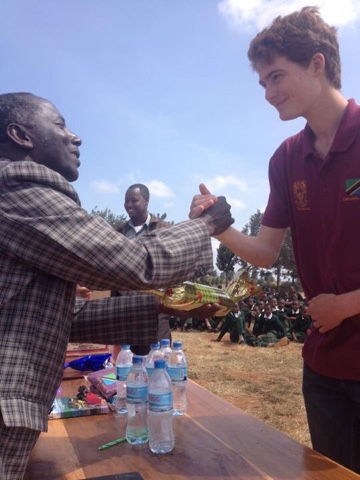 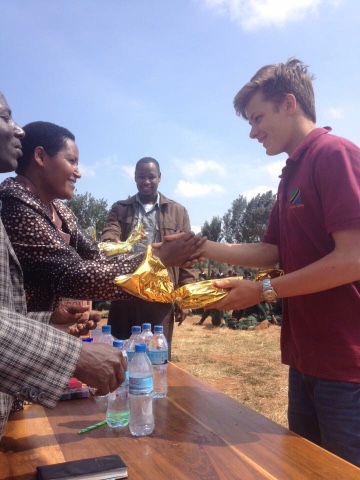 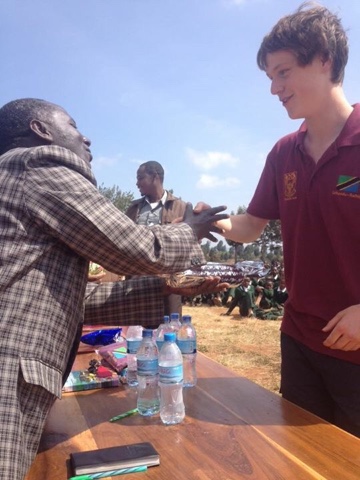 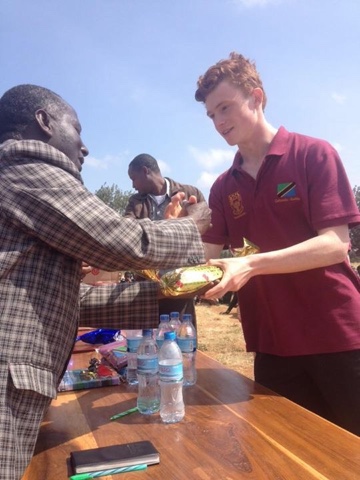 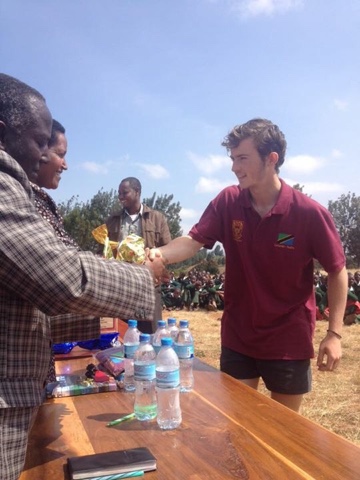 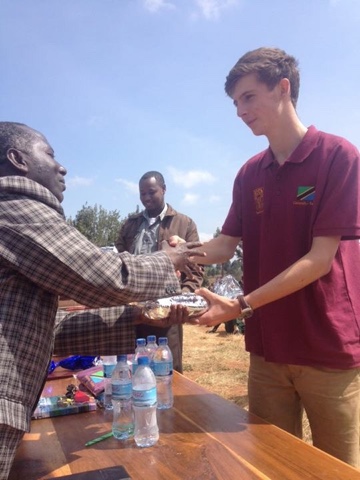 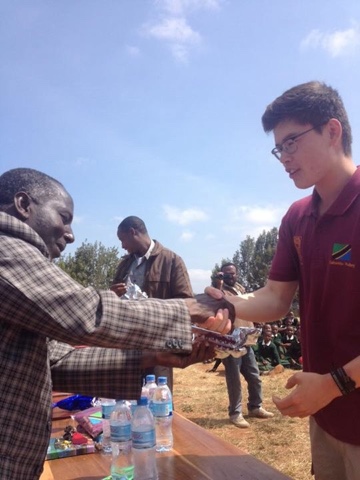 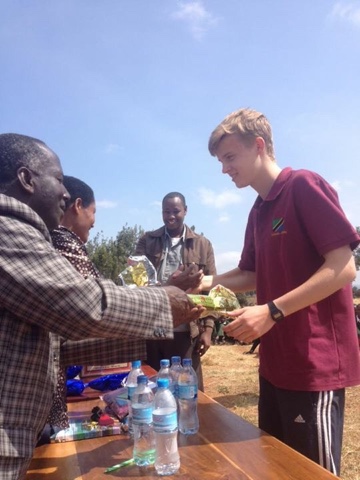 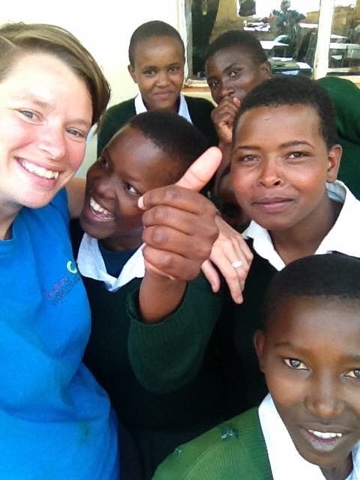 Posted by Inspire Worldwide at 06:29 No comments:

On our last day we got a lie in with a wake up of 630am. Being up slightly later meant we observed some of the seminary's assembly and in turn some corporal punishment.

Witnessing that really brought it home to us how real and very different the discipline system is out here.

After breakfast we proceeded to Titiwi Primary school. At Titiwi we sang a few songs including Old Mcdonald had a Farm, which was greatly received by the children. After that we played volleyball and with Mr. Cox's height advantage at the net Radley secured a victory.  Overall the visit to the primary school was a great experience and great fun with them all having so much energy, singing and trying to reach up and touch our hair.

At midday the cultural assembly started which was a great occasion. All 4 forms at Gehandu performed an excellent dance and a group called the 6 sisters singing and dancing interspersed with performances from us spanning from Shakespeare, Monty Python, and lots of singing. It was amazing to see Leokadia's heart felt speech about how much help Radley has been to Gehandu over the past 4 years. To finish Ollie Smith and Adam Hargreaves planted 2 trees to symbolise the permanent relationship between the 2 schools.

After lunch with our pen pals we prepared ourselves for  the football match between Gehandu school team and Radley, travelling to the stadium with our pen pals. We arrived at Mbulu stadium very psyched up after a lot of loud singing on the bus and waited for the bus to go back and collect the Gehandu team - which meant even more playing and singing with the local kiddies.

Radley took the lead by half time secured by Rupert, Gehandu scored in the second half and the match ended as a 1-1 draw. The game then went into extra time, Gehandu scored with 5 minutes left,  however Tom Binks was taken out in the box and converted the penalty to earn a last gasp draw. We said goodbye to the Gehandu teachers, penpals and students for the last time and headed back to the seminary for our last supper. The last day was a fitting concision to a great week of an excellent trip.

Ps sorry no piccies yet the Internet connection isn't great!

Posted by Inspire Worldwide at 06:16 No comments:

Today my team and I performed a back to back double lesson,  supervised first by Mr. Hills then Mr. Jewell.

We managed to pull off a solid set of lessons - the highlight being one groups sketch of a 'drugs bust'. Following our lessons,  and the free period, we then had the entire Radley congregation invited to eat with the whole of Gehandu school.  Their tri- weekly meal of stewed beans and maize (the only way I can describe it). From afar, the huge vats of food, served outdoors, looked like they were filled with some sort of very stodgy risotto, and in actual fact, the taste and texture was not too far off.

After our lunch we were invited to partake in the school's rendition of traditional African dance.  This at first sounded very painful, but turned out to be great fun and quite touching for some of the school sang and danced to songs about how they loved (naming each person) all us Radlians (+Aimee and Rachel the Inspire Leaders) and were very unhappy about us going on Saturday. Just 48 hours till our time in Mbulu is over.

With the conclusion of the evening meeting,  another day in Tanzania ended.  The 22nd July was a rather busy day and us boys willingly embraced the offered sleep.

5.45 was the waking time as per usual and the groans and moans cheerily greeted the dawn. After another standard breakfast of pancakes and magdalena cakes we embarked on the scenic route through Mbulu to Gehandu.

A group including myself walked the short distance to Titiwa Primary school,  having of course thrashed the beans as part of our morning chores.

We were greeted by the smiley faces of both students and teachers who early welcomed us into their school.  The headmaster showed us a poster which showed pictures of the books Radley had donated and it was clear to all how much it had aided their teaching. Volleyball was next on the agenda, and although we wouldn't have won any Olympic gold medals we sustained the bombardment from the small children and barely tied the match.

The home visit was an enlightening experience as we were invited by the most welcoming mother to take a tour of her home. Despite the vain attempts of the Tanzanian's to secure marriage prospects for Mr. Hills  and Rachel, the experience was extremely eye opening.

The next event in the calendar was the debate with St. Joseph's seminary. The motion of "This house believes that there should be more women in power in Tanzania" was fiercely proposed by an 'elite' team of Adam, Rufus and myself.

The visit differences were enough to convince most of the liberal Radlians that they were in fact more feminist than they thought!  After much shouting,  laughing and clapping,  Radley won the debate with a score of 75% to St. Joseph's 70%.

The visit to Mbulu Market provided another opportunity for us to spend our parents money on gifts which they 'might' like. The bustle and sheer number of people was unlike any experience one could find anywhere else. Items ranging from cows and goats to African fabrics and poorly faked Premier League shirts providing plenty of opportunities for us to barter.

Finally, a group of Radlians took part in a radio show with Good News Radio where we were able to read out Shakespeare and Roald Dahl as well as test our amazing host Kevin with testy riddles. It was an incredible experience for us and we talked for over an hour on the show. Thus it should be quite easy to see that we were ready for bed upon our arrival after dinner. 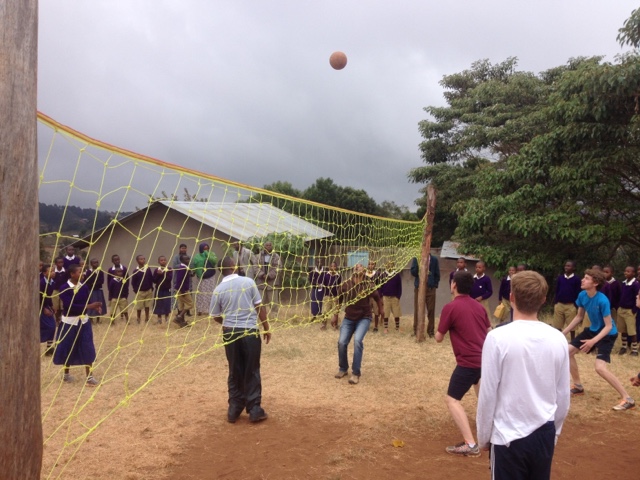 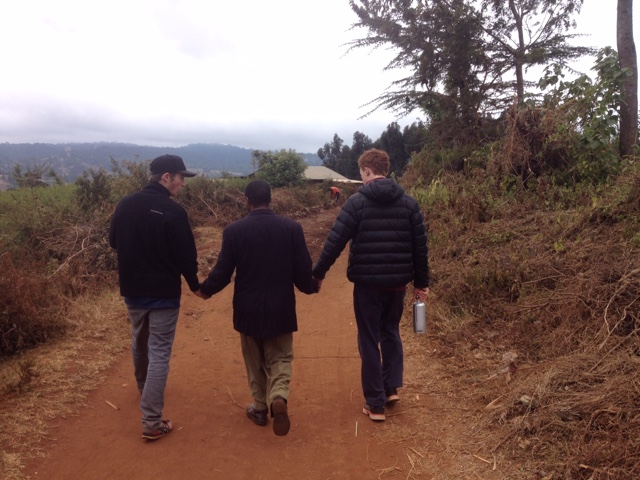 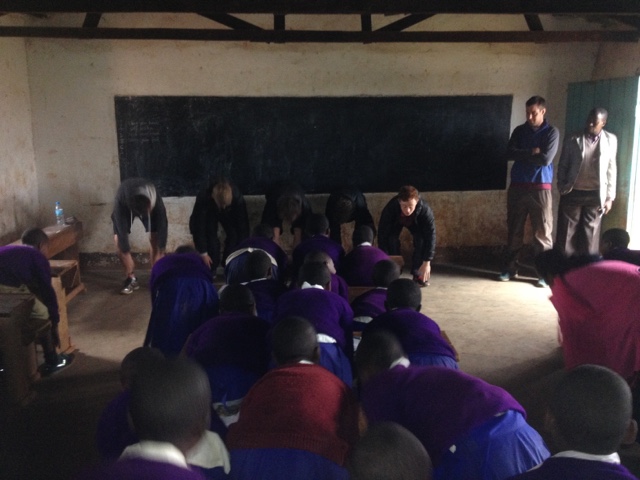 Yet again the deafening knock on the door at 5.45am by DLC confirmed the start of the day. Apart for the lucky three, who had managed a lie in, we had a delicious breakfast unfortunately without Father John.

The first two periods at Gehandu were free for myself, Rufus and Adam which we used to plan our lesson.  The lesson went well with the highlight being the class successfully identifying superlative adjectives correctly.

Break time certainly lived up to expectations and was needed after a long lesson with a variety of food on offer. I must admit, during this trip I have built up a list of food I will not go near for a while including soup, porridge,  pancakes (with carrot) and rice.

Today, we actually had lunch with some teachers from Gehandu in the library which was very nice. This was followed by the football match,  which was a mixed team game of Radley and our pen pals. Having surveyed the state of the pitch we all believed it was going to be a light hearted affair, how wrong we were... The tone was set in the 2nd minute after an outrageous tackle from a Radley player on another raised the temperature.  However,  the match did settle down despite the fact it was most definitely a hard match to play. The game ended in good spirits and we swiftly headed back to our accommodation.

Finally what was really the highlight of the day was the comment made to Adam by a 4th form student who said: "Thank you so much for Radley, look around at those girls dorms, that drinking water, the printer and computer, this is all down to Radley, so thank you all so much!" 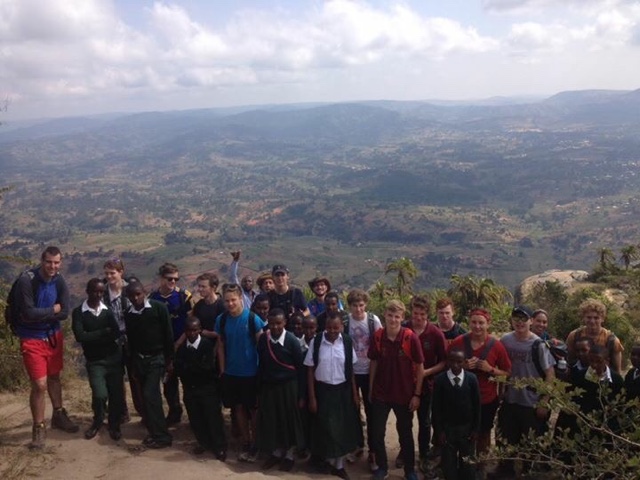 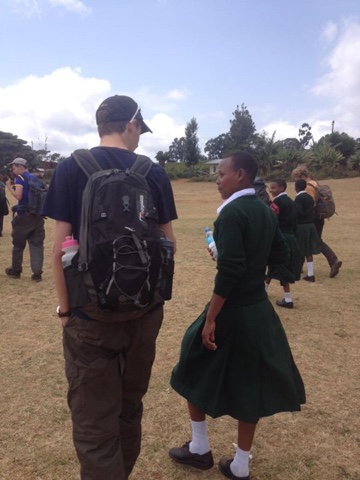